Manuel Romero and Lisa Corpus describe “hope” as being knocked down by a storm, but recognizing God’s rainbow. “We found part of our rainbow when we met the young recipient of one of our son’s organs,” Lisa said. A severe asthma attack claimed 2-year-old Benjamin in 2013, but they donated his organs to save the lives of other children. “If it were the other way around, we would want someone to make the decision that could save our baby’s life.” A little more than two years later, they met Benjamin’s liver recipient, 4-year-old Jacob Lopez-Goday and his family. Together, they laid flowers at Benjamin’s grave. “It’s hard to put into words all that has transpired,” Lisa said. “We’re family now.”

Before losing their son, Manuel and Lisa didn’t think much about organ donation. Now, they share their testimony wherever they can. They work at health fairs for LifeGift and participate every year in the Donate Life Texas 2nd Chance Run in Fort Worth and have emerged as one of the event’s largest teams.

“We learned the miracles and impact an organ/tissue donor can have on so many lives. It’s a beautiful and selfless thing to do,” said Lisa. 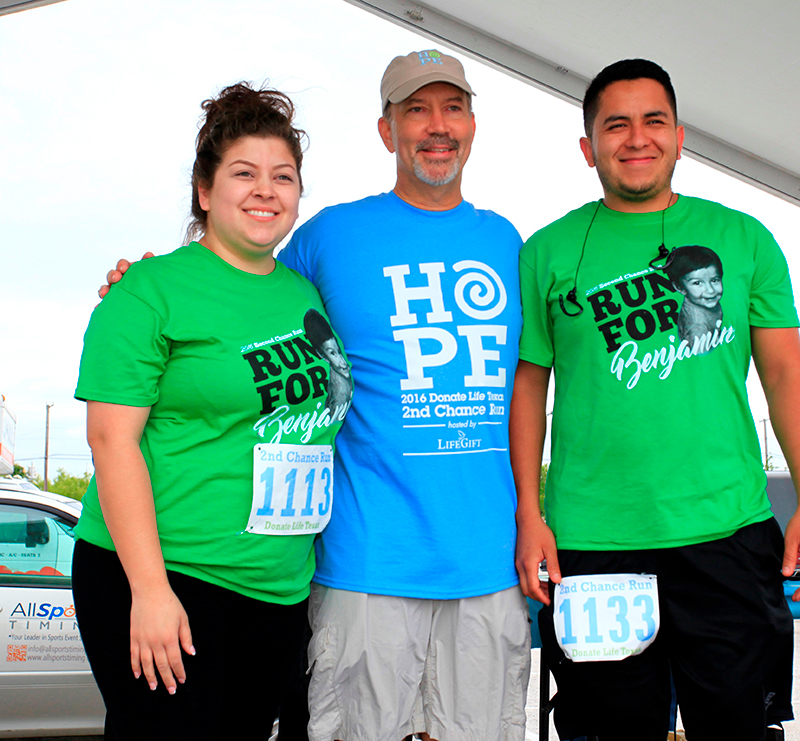 Lisa and Manuel pose for a photo with Kevin Myer, LifeGift’s president and CEO, after being recognized as one of the largest teams during the 2016 Donate Life Texas 2nd Chance Run in Fort Worth.